When two waves are superimposed on each other it is possible that the resultant wave has a higher or lower amplitude at certain moments in time. This phenomenon is called interference. One classical experiment related to interference is Lloyd's mirror. In the classical experiment, light from a monochromatic slit source reflects from a glass surface at a small angle. The reflected light then interferes with the direct light from the source, forming interference fringes. This pattern is called Lloyd's mirror effect.

In the classical experiment light is used but the same result can be obtained using sound waves. When a sound wave is reflected from a surface the reflected sound wave will also interfere with the direct sound wave. This phenomenon can also be experienced with aircraft noise due to the ground reflection. However, because an aircraft generally (hopefully?) moves in the sky, the interference pattern changes over the time.

Today I managed to include this effect in my aircraft auralisation tool. The figure below shows a spectrogram of a synthesized aircraft passage. In the spectrogram the Doppler shift can be seen as well as many curves which represent interference fringes, the Lloyd's mirror effect. The mirror effect is in this case solely due to the ground. Now, since my implementation supports reflections from buildings as well, the effect will also be obtained due to these reflections from facades, although far less pronounced. 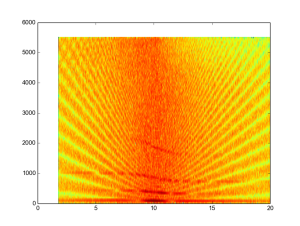