Two and a half weeks ago I arrived in Delhi. Since then I went to Agra, Jaipur, and Jodhpur, where I decided to stay some longer. Let's try and keep it chronological, and start with Agra. 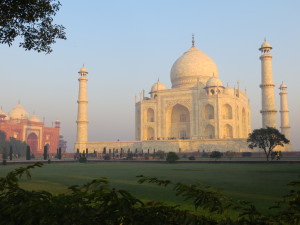 I was in Agra for I think 5 nights, and the location I was staying, Saj Palace, was quite nice. There were plenty small restaurants and shops around, and the hotel had a nice view on the Taj. People came and went, but like me, there was a Canadian family staying a bit longer. They were actually on a world trip of a whopping 14 months! Anyhow, in Agra I finally was able to do some work on my thesis as well. 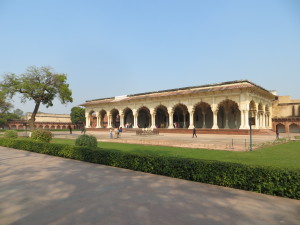 After Agra I went by train to Jaipur during which I had a nice conversation with a local. She was having a puppy along, and, as long as the other people in the coach wouldn't mind, according to the rules the dog should be allowed to stay. Well, I was the only other one, and I didn't mind at all, but somehow the conductor didn't agree and sent the dog to a special coach. So stupid...

Anyhow, Jaipur. I don't have much positive to say about my stay there. While the hotel had friendly personnel and the rooms were quite good, it was so damn noisy I couldn't get any sleep at all. And when you then get diarrhea as well...pfff. But before I got that I did get to see some of the town, but there wasn't anything special in my opinion, and therefore I wouldn't recommend anyone to go there. 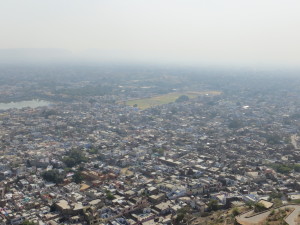 Because of the diarrhea and fever I stayed a bit longer in Jaipur. Eventually I decided to go to Jodhpur even though I was still sick. The train ride from Jaipur to Jodhpur was I think the best moment I've had during my stay here. I booked a ticket for an AC3 coach, but wasn't able to find it as all the numbers were messed up when it arrived. I went instead in a normal sleeper class. The smell at first was horrible, but after a few minutes you're used to it. I put my stuff away,  lay down on a berth, in the sun shine, with the windows open the wind going through the coach. It was great! In the meanwhile, cracking some nuts and talking to some locals. Best moment so far :)

In Jodhpor I am now staying at a great hotel. The people that are working here are very friendly, the food is the best I had thus far, and it's quiet! Like me there are quite some others here who are traveling for more than four months through India. Some are going from north to south, while others went south first. It's interesting to hear where they've been, and what they thought of the places, as I also haven't decided where I will be going.

Two days ago I went to see a doctor and got some medication for the diarrhea and fever. I think I got it because I drank half a glass of tap water. Stupid. Things seem to be improving now, though the antibiotics are making me so tired, that I haven't been able to explore Jodhpur yet. As I will be staying for a least another 5 days in Jodhpur, that shouldn't be a problem though. After those five days I will take the train to Jaisalmer where I would like to go on a 2 or 3 day camel safari.